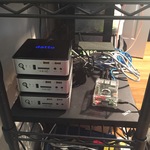 The three (working) nodes, the T410 laptop, and the Raspberry Pi firewall 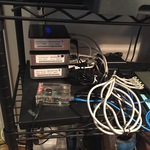 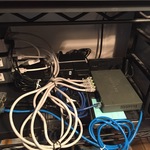 More of the networking is visible here (but not everything)

So since my last post, I’ve changed my hardware setup a little bit. The old Node #2 died. It works just fine for about 2 - 10 minutes, then it powers off. No warning, and the amount of time before it shuts off is not consistent. I can’t determine the cause of the issue, so that computer is now junk.

Unrelated to this project, I had a old Lenovo T410 laptop laying around. It’s got a first-gen Core i5 CPU (dual-core & HyperThreading) and 4 GB of memory. I took the 8 GB memory stick and the 128 GB SSD out of the old Node #2 and put it into the T410. However, it wouldn’t boot. After some troubleshooting, the T410 doesn’t support 8 GB memory sticks. Frustrated, I threw in a spare 4 GB stick, bringing the machine’s total to 6 GB. While still usable, I was disappointed that the fastest machine wouldn’t have 12 GB of RAM. Especially when the much weaker nodes all have 8 GB. Ah well,

I also redesigned the network the machines are connected to. Just like the T410, I had a Raspberry Pi (1, Model B+) lying around and I read that it could run IPFire, a Linux based firewall distribution. I knew that using a Pi would bring some limitations, most notably, the Pi is really (really) slow. The Pi 1 is something like two or three times slower than a Pi 2, and a Pi 2 isn’t anything special. Also there was only one Fast Ethernet port (100 Mbps) and the USB 2.0 (~250 Mbps) ports shared the same internal communication bus. So performance was not going to be a strong point. IPFire could certainly do more things than the stock firmware of the D-Link router I had. (Which was not compatible with any alternative firmware.) I could get my hands dirty with networking with IPFire. So I ended up buying two Linksys USB 3.0 gigabit Ethernet adapters ($12.50 each, obviously won’t run at full speed) and installed IPFire. Since the built-in ethernet device was unused, I decided to connect that to another D-Link router I had laying around (DIR-615). (Postscript: I have a lot of equipment laying around!)

All four nodes are currently running Debian 9 Stretch. I have also just installed Salt on all four nodes. The laptop is acting as the master and the other three nodes are acting as Salt minions. I want to eventually learn more about salt and set up some cool things. One idea I had is to use Salt to create many Apache instances using Linux Containers (LXC) and then run a load balancer. Another idea was to use Salt to create a Kubernetes environment. I think I will attempt the Apache load balancer first.