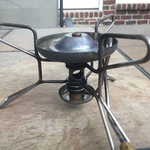 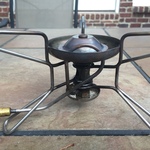 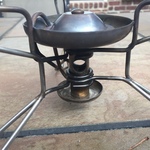 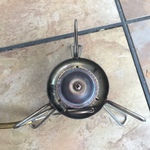 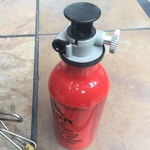 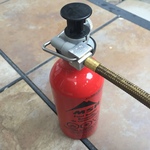 I saw a MSR Whisperlite on my local Craigslist for $25. I had heard about the stove before, but I hadn’t seriously looked at one. After reading up on it, I decided to pick it up.

A bit about stove, first, it’s old. MSR first released the Whisperlite in 1984 still makes it today. The design is fundamentally the same meaning it has been tested by time. I estimate that the stove I got was made around 1990, marking my stove at over 25 years old.

The Whisperlite uses white gas, also known as Coleman Camp Fuel. It’s pretty widely available as far as camping fuels go. A gallon of it cost $14 at Walmart. (There was a $10 gallon by another brand. I should have gotten that.)

The stove needs to be used with a specific fuel bottle made by MSR. I decided to go with the smallest 11oz version because I highly doubt I would ever need more fuel than that. (It’s usually me or me and somebody else.) The fuel bottle has a pump used to pressurize the fuel.

To operate the stove, you fill the fuel container and connect it to the stove. Then you pressurize the fuel by using it’s built-in pump. All it takes is about twenty or so pumps, it’s not hard. Next you open the valve on the stove and when a little fuel comes out, close the valve and light it. That bit of fuel will burn below the main flame jet. This process primes the stove, meaning it warms up the stove’s parts so that the fuel will be hot and more ready to burn. Once the priming flame has died down (and before it goes out), open the valve again and the next bit of fuel that comes out should come out in gas form, be instantly lit by the priming flame, and come out the fuel jets on top. It’s a little hard to picture, it will make much more sense to see it. Video below.

Overall, the stove is all around solid. It’s powerful, easy to use, and reliable. One downside is that it’s a little heavy. Not really heavy, but it’s not something you’d call lightweight. But considering it’s age and flawless operation, it’s a very good stove. You will surely be satisfied.

Personally, I’m probably not going to use this stove often. I think this stove would be perfect to use when cooking for 3-4 people. My current setup for 1-2 people is using an isobutane fuel canister with that cheap Etekcity Pocket Rocket clone. Lighter, fewer parts, and works well enough. Be on the lookout for a post comparing the two and a boil test.