So this project wasn’t planned out, it was just a vague idea, then I saw somebody selling these computers on Ebay for cheap, I bought some and the project started.

The goal was to create an environment where 3-4 nodes would all be configured to work together on something. No further specifics. I’m still trying to figure out what exactly I will do with these machines, but for now, I will get the hardware set up.

So I found somebody selling re-branded Zotac ZBOXNANO-AD12 for $25 each.

The catch was there was no power cable and no RAM or hard drive was included. However, I read a post on Reddit (where I found the deal) that said that his machine came with 8 GB of RAM and a 1 TB hard drive. I decided to chance it.

I ended up lucky. I bought six machines. One was DOA. Five came with 8 GB of DDR3 (1 SO-DIMM) and four came with 1 TB 2.5 inch hard drives. Well if you check Ebay, you’ll learn that an 8 GB SO-DIMM and a 1 TB 2.5 in HDD both go for $30-40 each. I sold all four hard drives for more than $40 each. After shipping costs, I have essentially recouped my original purchase.

The reason I sold the hard drives is because I really wanted to have SSDs in these machines. There was a good chance that I would need data to be copied from one machine to the other and I didn’t imagine ever needing 4 TB of storage space. I found four 128 GB Samsung SSDs for $35 each, also on Ebay.

I had an old D-Link DIR-655 router laying around, so I decided to connect the machines to that. I wanted to have the machines on their own separate network. No particular reason other than network segmentation. This way they get their own range of addresses and are separate from my local LAN. 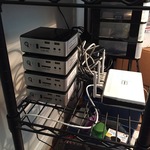 The machines all stacked up 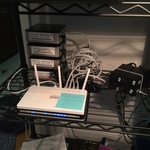 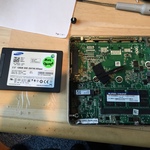